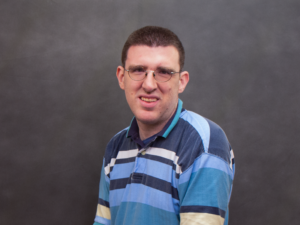 Stuart, whose father is a photographer, was born in St. Louis but grew up in New Orleans. Stuart holds a BS in Music from Millsaps College from 2007, and two Masterâs Degrees, both from the University of Wisconsin-Milwaukee and both from 2012. One is in Music History, and the other is in Library and Information Science. After that, Stuart returned to New Orleans and pursued a post-baccalaureate certificate in applied computing with an emphasis on Integrated Application Development, receiving it in May 2016. In 2018, Stuart received a Certificate in Web Accessibility from the University of South Australia in Adelaide and the Centre for Inclusive Design in Sydney, Australia. Stuart began working at HDC in February, 2016.  His duties are varied and include: graphics specialist, webmaster, database specialist, and photographer. Outside of work, he enjoys music, New Orleans cultural life, and singing in the choir at Touro Synagogue. Stuart can be reached at ssimo3@lsuhsc.edu or you can visit him in his office in the Human Development Center building in room 463.